The following series of graphical timelines are intended to present a total view of all the prophesies has they have been revealed to Daniel in Daniel 11:1-45.

The first of these timelines summarizes the rulers of the Persian empire. To the left side in the graphic is the verse in Daniel 11:1-45 that is referenced. The horizontal triangle points to the name of the Persian ruler who fulfilled that verse. Each Persian ruler is in a light green box. Other information is included further to the right, including the dates that king ruled, and any relevant notes as regards to what has been revealed in the book of Daniel. At the bottom of this graphic is the reference to the transition from the Persian empire to the Grecian empire. Those rulers are in light blue boxes.

During the next two centuries following the death of Alexander the Great, his kingdom was split into four warring fractions. The following table is the similar format as the one above, with the verse referenced to the left, and the remaining part of the table divided into four columns for each kingdom. Daniel 11:4-35 gives a prophetic list of events focusing mostly on two kingdoms; the northern kingdom under the rule of the Seleucid rulers, and the southern kingdom under the rule of the Ptolemaic rulers. This is also reflected in the following table, where the kings are named for each kingdom, and their interaction in the verse is cited to the left in each row. The arrows reflect the influence of one person upon another. For example, in the row describing Daniel 11:6, Ptolemy II Philadelphus gave his daughter Bernice for marriage to Antiochus II Theos to form an alliance with him. Though names are not given in these series of prophecies but rather events are specified, it is clear from the historical record that these names and places exactly fulfill the prophecies written by Daniel.

These passages of Daniel are exciting to compare against the historical record. To actually map the historical record over these verses, or read or hear the account that others have studied, is truly remarkable. Many have done so, such as Dr. Hocking, Dr. J Vernon McGee, or John F. Walvoord (none of whom were asked to endorse this site). Dr. Hocking had a particularly detailed presentation which is available on his site in his archived broadcasts, on 18 and 19 January 2000. On this broadcast he gave a verse by verse comparison with the historical account with this section. Since so many other great works already exist on this, these passages are only summarized below, but the reader is encouraged to check out the literal fulfillment of these passages as recorded by these references and others. 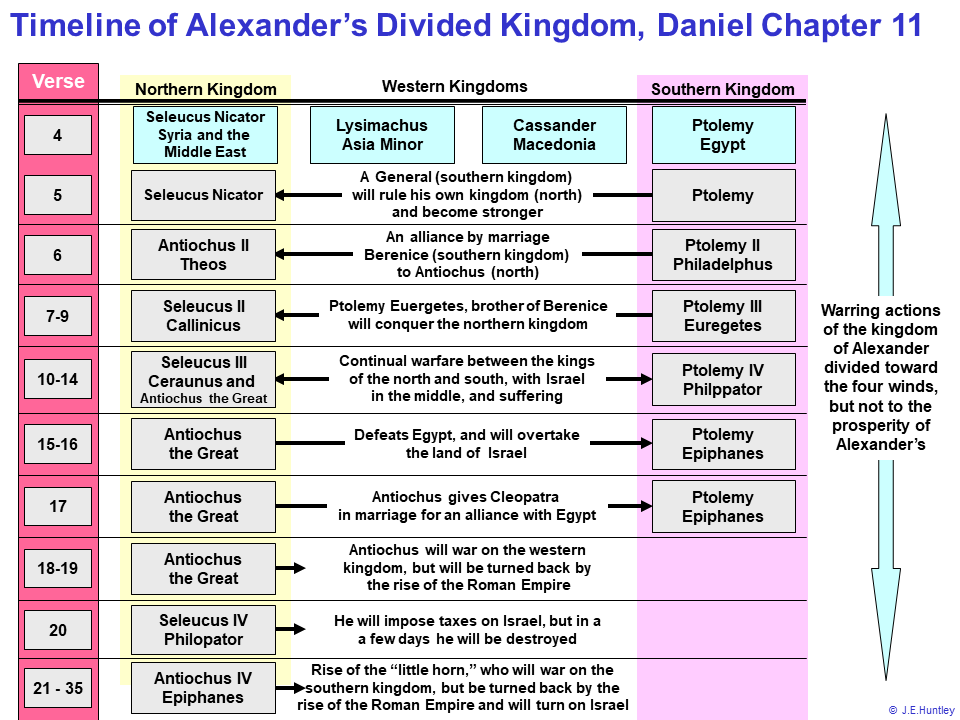 The timeline for Daniel 11

The following chart builds upon the chart developed and shown in the timeline for Daniel 9. The focus of this timeline is in the center of the graphic on the yellow oval with one arrow to the left, the other to the right. These arrows illustrate two groups of verses in Daniel 11:1-45, and the timeframe in which they were or will be fulfilled at the time of this writing. For Daniel 11:2-35 the yellow arrow points left toward the section on Daniel 8:1-27 were the discussion on the little horn was presented. The arrow on the right represents Daniel 11:36-43 and the discussion on the little horn in Daniel 7:1-28, which is the Antichrist. 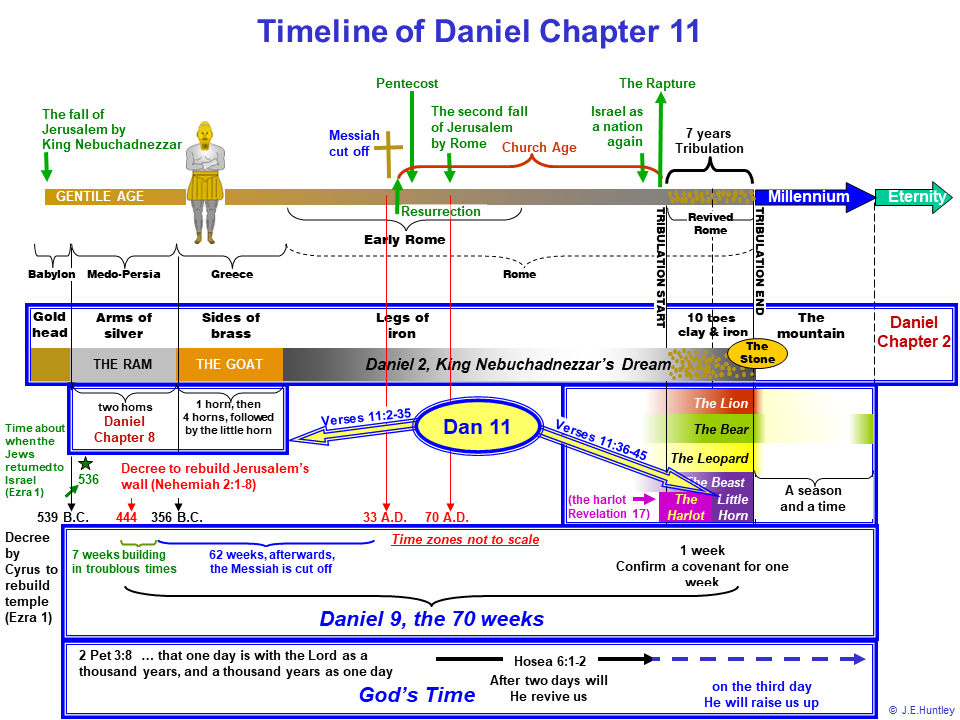 The Antichrist during the seven years of tribulation (the little horn in Daniel 7:8)

The following charts amplify Daniel 11:1-45 and the passages concerning the Antichrist and his invasion into Israel during the latter half of the tribulation during the middle part of the seven years of tribulation. More of this discussion can be found on this site on the page describing the events in Revelation 11. However, it is necessary to first introduce the timeline used for Revelation, reference the discussion on the interpretation using timelines web page on this site. There you will see the explanation for the following timeline. 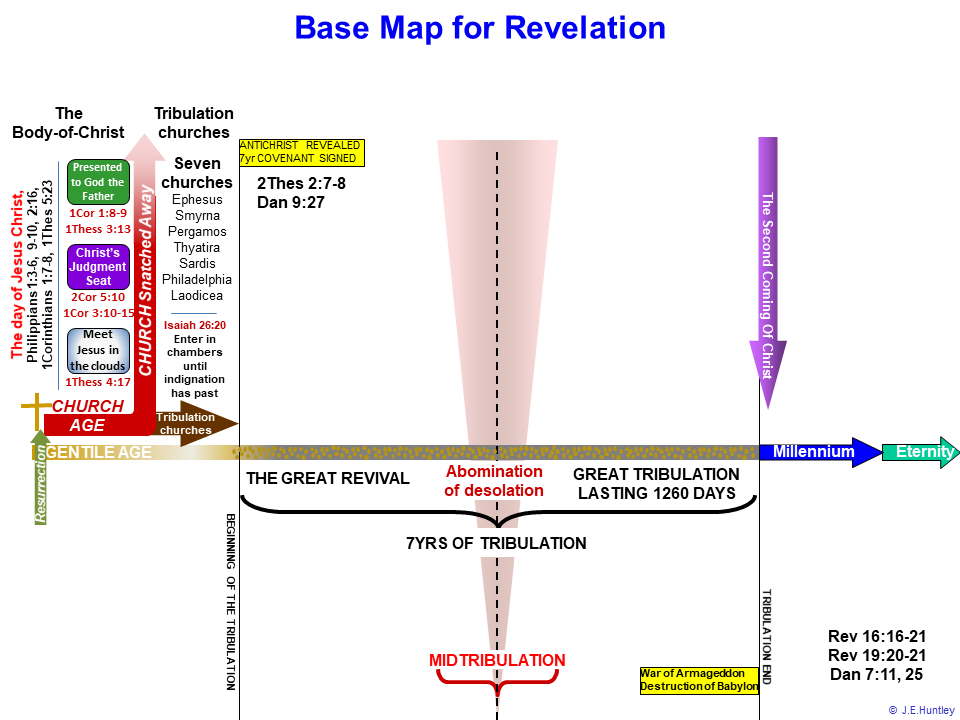 With the above chart as a backdrop that amplifies the seven years of the tribulation, it is instructive to overlay the events concerning the Antichrist described in the latter verses for Daniel 11:36-45. At this juncture, it is important to get a sense of what has been revealed to Daniel so far:

Antiochus Epiphanes helps to depict the character of the future Antichrist, who will be revealed during the seven years of tribulation. The events leading up to the invasion of Israel by the Antichrist and his forces can be better understood, as seen in the remaining verses in Daniel 11:1-45. Daniel 11:40 indicates that a significant battle will take place in which the forces of the north and south of Jerusalem will array themselves in battle against the Antichrist. The reason for the Antichrist and his forces even being involved with Israel at that time is seen in Daniel 9:27, where there will be a covenant between the government(s) that the Antichrist represent with Israel for seven years, and which defines the beginning of the seven years of the tribulation. However, at the midpoint of this period, the Antichrist will cause the cessation of the sacrificial system and offerings to the Lord on the temple mount, and in its place he will erect his own image to be worshiped, Matthew 24:15. This worship of the Antichrist will continue for the remaining 3½ years of the tribulation period.

Daniel 11:40 indicates that many countries that are part of this confederation who will fight against the Antichrist, but none are explicitly listed. Actually, based on the seven year covenant entered into between the Israel and the government represented by the Antichrist, this push is actually an invasion into Israel. Because of the existence of this covenant, any attack on Israel would be an attack on the Antichrist's sovereignty. Some expositors feel that this is when Ezekiel 38:1-23 or Ezekiel 39:1-29 are fulfilled, while others do not. The position taken on this site is in agreement with the latter and is discussed on the section that covers Ezekiel 38 and Ezekiel 39. This confederation of nations may be another group of countries not listed in Ezekiel 38:1-23 or Ezekiel 39:1-29 who conspire against the Antichrist, and it will be a ferocious battle. If the war in Ezekiel is different from this one, then it is likely that the countries pressing against the Antichrist are the remaining Middle East countries not listed in Ezekiel. The following map is only a suggested set of countries who could comprise this confederation described by Daniel. 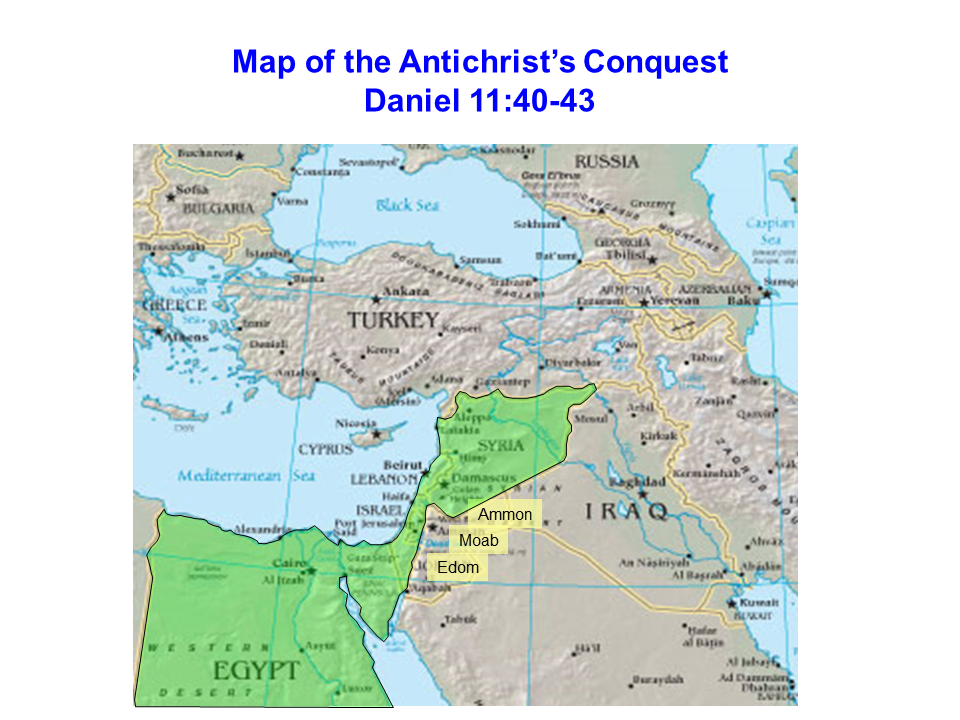 These confederated countries will have ships in the Mediterranean Sea to oppose the Antichrist, and all their forces will come upon him suddenly, which may be Syria and Egypt. As shown in the following timeline, the solid yellow object begins just prior to the mid-point for the seven years of tribulation, and ends with the battle of Armageddon and the return of the Lord Jesus Christ with all His saints, Revelation 19:1-21. Showing the invasion just prior to the mid-tribulation point will not violate the other passages concerning the erection of the image of the Antichrist in the temple used by the Jews during the tribulation. The Antichrist will first have to fight the war, and occupy Israel, then kill the two witnesses, Revelation 11:1-19 (see the discussion on this web site on Revelation 11), and after that time has elapsed, then the events revealed in Revelation 13:1-19 will occur concerning the image of the Antichrist. It is argued that this part of Daniel 11:1-45 reveals that about the mid-tribulation point, the Antichrist’s forces will enter and occupy Israel. However, for some reason Antichrist will not invade the ancient countries of Moab, Edom, and Ammon, or modern day Jordan, but he will invade and conquer Egypt, and spoil all her riches from since antiquity. Libya and Ethiopia are on the slate to be taken next also, but news from the east stop the Antichrist from pursuing after them.

The reports from the east that trouble the Antichrist will describe the westward march of the 200,000,000 man army toward the Antichrist's position and his possessions. This massive army is a result of the sixth trumpet that is blown in judgment during the first half of the tribulation, and the four demonic angels released. They had been prepared for the hour, day, month and year. In other words, they have a divine appointment to do battle with the Antichrist, and thereby set the stage for the Lord's return and the total destruction of the Antichrist and his forces. This 200,000,000 man army will be solely responsible for the deaths of 1/3 of mankind. The speculation is that this army will originate in China, as they are the only country in the world today to muster an army of this magnitude, Revelation 9:13-21. The sixth bowl judgment dries up the Euphrates river, which prepares the way for the kings from the east and facilitate their crossing, Revelation 16:12. This is the time when Satan, the Antichrist, and false prophet gather the kingdoms of the world to meet this threat and do battle at Armageddon Revelation 16:13-16.

This is described in Daniel 11:45, where all of these events lead up to the Antichrist invading Israel, and establishing a permanent presence in Jerusalem. Again, this may occur prior to, or in the midst of the mid-tribulation, when the covenant with Israel is broken, and the image of the beast is erected within the holy place in the temple, Daniel 9:27, Revelation 13:11-18. The Antichrist will come to his end, and none shall help him, Revelation 19:19-21, Daniel 7:11-12, and Daniel 7:21-28. 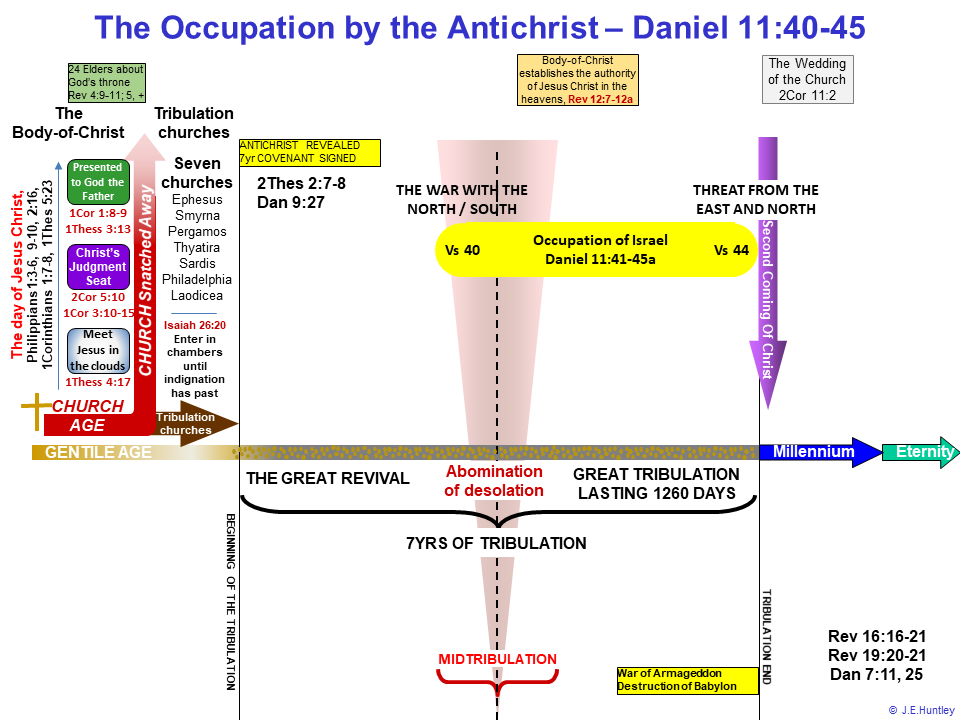